I confess.  When I ran up the “Rocky” stairs of the Philadelphia Museum of Art a couple of weeks ago, I was NOT wearing my stilettos.  Plain ol’ Keds sneakers were my running shoes of choice that day.  So sue me—I’ve still got the bragging rights!

I was in Philly with my older son to visit with my younger daughter who’s going to art school there.  Somehow when I’d booked the flights, following in Sylvester Stallone’s footsteps up those imposing steps was about the furthest thing from my mind.  All I wanted to do was hang out with my kids, play with the pug, cuddle the cat, see the new life my baby had carved out for herself.  But when in Rome…

For three days we walked and talked, hung out at the apartment, hiked gorgeous forest paths and ravines with the dog rambling on ahead like a stout little barrel on short legs, toured her art studio, saw the Liberty Bell, ate out, dined in, cooked Jiffy Pop popcorn on the gas stove and settled in for a movie per night on DVD.  It was an absolutely heavenly, relaxing trip from start to finish.

But the stairs beckoned to me all weekend, and finally, on the afternoon before we left, we swung by the museum.  At least, I said, to get a picture with the “Rocky” statue.  My daughter thought it was funny.  My son thought it was ridiculous.  A couple of teenage boys launched themselves past us and up the stairs as we stood at the bottom, staring up.

I started to hum the theme from the movie.  My son rolled his eyes and banked his cigarette, then dutifully kept his crazy mother company.  At the age of twenty-one, he ran faster, of course, but gallantly held back just before we got to the top so that I could catch up.  My daughter caught the two of us a the top of the stairs, arms raised in triumph.  Even with the zoom lens, we look about a pixel high in that one, but hey, WE  know we’re in the picture!

There are a lot of things to do on a Labor Day weekend…but when your guy lives near Milwaukee and owns a Harley, the only plan possible was to spend it at Harley Davidson’s 105th reunion.  So Friday morning I traded the high heels, sneakers and flip-flops for my lug-soled black boots and we took off for two days of wandering on two wheels.  There was a H.O.G. Haven not far from where I live, and for days before the weekend, bikers started arriving up to a week early, parking their RVs and tents and meandering around the countryside.  The sound of engines revving was everywhere, and the everpresent bikes resembled bees coming and going from a hive.

But when Friday came, all roads led to the Milwaukee lakefront, and the two day music extravaganza at the Summerfest grounds and Veterans’ Park just north.  It was sunny and dry, gorgeous weather for riding, listening to music, and just hanging out.  We caught glimpses of leather jackets and T-shirts from all corners of the globe–not only from all over the U.S., but Mexico, Ontario, Germany, Korea, even New Zealand.  We hit the Harley Davidson museum that first day, and a dealership party, and then sat at a coffee shop at the lakefront watching traffic go by before we finally entered the swarm trying to find street parking down at Summerfest.  During one of our parking searches, we were directed to a spot where we parked next to a grizzled, amiable gentleman with a wiry grey beard who we’d been following in bumper-to-bumper traffic for a few blocks.  We made acquaintance, and he turned out to be a poet and writer and a vagabond known as Iowa “Poet” Blackie”.  I bought one of his books on the spot, and he autographed it for me before we took off again.

We took in the concerts the first day, but on the second, decided to skip the sardine-like crush at the Summerfest grounds and took off instead for the scenic route between dealership parties in the area.  Yes, that meant that we’d actually skipped going to see Bruce Springsteen with about 70,000 other people.  But we’d caught one of his concerts just a few months before.  And instead, between sessions of bike ogling and stunt demos, along the way we saw wild turkeys, wildflowers, cornfields and weeping willows, all under glorious cloudless skies.   Which is a lot of the fun to me.

When Sunday morning came, the powerful sound of engines flying past on the streets and freeways was still a steady, primal hum.  But the campgrounds were emptying, and a lot of the bikes going past were fully loaded up and tied down for the trip home.  The memories will last a lot longer. 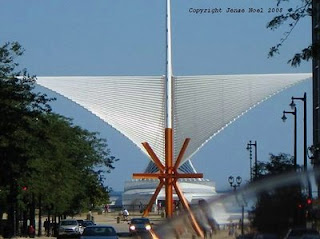 A few weekends ago I took my “grand-pug” on a trip out of town to see my friend Liz, who lives “up north” in Marshfield, Wisconsin.

I killed the proverbial two birds with one stone, since I not only got to hung out a friend I hadn’t seen in WAY too long, I got to spend some time playing with my daughter’s still-new puppy before the two of them move several states away when she goes to grad school.

Liz–who I know from way back in the day when we were both young journalists on the staff of The Milwaukee Journal– has a great shade garden. Golden Boy has both a face and a corkscrew tail too cute for words. And as long as I wasn’t at home in my own living room, Bandit, the co-dependent chocolate labrador, couldn’t try to push him out of my lap.

Kids and dogs…they’re so cute when they’re small. But only the dogs have wagging tails!

It was one in the morning, and I was completely disconnected.

The sliver of a moon had long set, and above me was a solid black sky studded with more stars than I had ever seen. The Milky Way drifted like a gossamer scrim across a swath of inky eternity, and Jupiter rose over a nearby tree, shining like a beacon. A large chorus of bullfrogs sang in the distance. Theirs was a primitive, wordless music, which started with a few isolated twangs like a rubber band. Then, as if a froggy conductor stepped up to a stump of a podium in white tie and tails to direct the orchestra, a deep and steady thrummmmmmm, and then silence. Then, after a few measures of relative quiet, the twangs signaled the orchestra’s warm up again.

We were on a long weekend driving trip to see friends in Michigan, and I hadn’t checked my email in three days. Or seen a newscast, or read a paper. It felt weird…and wonderful. I wish I could have said the same thing about my cell phone during this trip, but with four kids to keep tabs on as well as elderly relatives faltering more by the day, that was out of the question. But just now, at this hour, even the phone was turned off and left behind in the house.

The place where we stayed was in a rolling area of southern Michigan known as the “Irish Hills.” Two days earlier, and only a few hours into the trip, our frenzied and frustrated pace had vanished as soon as we rounded Gary, Indiana, and decided to ditch the bumper-to-bumper construction-delayed traffic crawling on the interstate in favor of something more rustic…and moving faster.

Our first official nod to “vacation time” was a stop at the Indiana Dunes National Lakeshore, where we parked our folding chairs on a sandy beach and ate the sandwiches I’d picked up from Panera Bread at 7:30 that morning. The wind was stiff and cold, and the waves were high. Seagulls hovered in anticipation around our feet and lurked, hovering, just over my left shoulder until we finished lunch, leaving them no leftovers. I took picture after picture of the parks’ pavilion, made of intricately patterned red brick and faintly Moorish detail. I took the wheel for a while, relearning how to drive a stick shift. I killed the engine a good dozen times at various stop lights, and added another fifty miles to the drive when I missed a road sign as I was struggling to put the Chevy into first gear again…and again.

We took the meandering old Chicago Road that had begun as an Indian trail, and turned into the main pre-interstate route between Detroit and Chicago. Or—around two hundred years ago—the primary military transport road between Detroit and Fort Dearborn. The two-lane road now ran through tiny towns with names like New Buffalo and White Pigeon, and was lined with houses that wore their age gracefully, with gingerbread flourishes and deep shady porches and lush hanging baskets filled with petunias. “For Sale” signs abounded…as did occasional pockets of commerce.

It was a land of few McDonalds but any number of one-of-a-kind restaurants, and a handful of drive-ins as well. We ate burgers and fries and Cokes at one, and I rued the fact that there were no tailfins on the little silver Aveo. As soon as we’d placed our order, the radio station started playing something by the Beach Boys. And then Martha and the Vandellas. And Gary Puckett and the Union Gap. We sat in a time warp as we scarfed down our meals.

In the three days we escaped from routine, we canoed on a series of quiet, sleepy lakes, making our way through flotillas of water lilies. The only sounds that surrounded us were bird calls and the occasional slap of lily pads against the sides of the boat. We went to a backyard barbecue, played a seriously competitive game of beanbag toss, ate at Harold’s Diner, took in a rodeo, just sat around.

We would be leaving early the next morning, with more than three hundred miles to drive to get back to our daily lives. The Chicago Road would inevitably have to give way to holiday traffic on the Indiana and Illinois Tollways. And I’d eventually have to sit back down at a computer and connect with the “real” world.

But the evening air was cooling fast, and the sky above was absolutely hypnotizing. I pulled my folding chair closer, and rested my head on the soft leather jacket covering a familiar shoulder. As the bullfrogs periodically gave their throats a rest, a bunch of coyotes chimed in and howled in the distance. Fireflies sparkled brightly, illuminating the drift of fog rising from the lake across the road.

And as I nestled in and looked up at the stars above, I felt completely…connected.

Mary T. Wagner is a former newspaper and magazine journalist who changed careers at forty by going to law school and becoming a criminal prosecutor. However, she never could step away from the written word entirely, and inevitably the joy of writing drew her back to the keyboard.

A Chicago native, this mother of four and recent new grandmother now lives in rural Wisconsin, where she draws much inspiration for writing from daily walks in the countryside with her dog, Lucky, and the cat who thinks he's a dog...The Meatball. Wagner's ongoing legal experience has ranged from handling speeding tickets to arguing and winning several cases before the Wisconsin Supreme Court...sometimes in the same week!

Her first three essay collections--Running with Stilettos, Heck on Heels, and Fabulous in Flats--have garnered numerous national and regional awards, including a Gold E-Lit Book Award, an Indie Excellence Award, and "Published Book of the Year" by the Florida Writers Association. Now her latest book, "When the Shoe Fits...Essays of Love, Life and Second Chances" rounds up her favorites--and reader favorites--into a "best of" collection now available on Amazon in paperback and ebook formats.